Re: Vanilla Instance to work with two Projects

If it was just content/community you could control it via role priviliges.

Re: Can't install it

Re: Is there a way to block user downloads unless signed in?

Remove view rights for the category for the Guest role.

Via dashboard under Role permission

Re: Where do I find "Vanilla ACP » Appearance » Message" In Current Version?

If this is a test forum, I'd suggest to copy that line somewhere in the default.master.ppl of your current theme temporarily (!) just to try out if this is a Vanilla or a chat problem. Check your browsers network and JavaScript inspector for further hints

Re: Where do I find "Vanilla ACP » Appearance » Message" In Current Version?

In case that you would like to customize your theme , I would recommend to not use Foundation. The frontend is built from React components. As long as you are not fluent with the JavaScript eco-system (React, TypeScript, yarn at least) everything becomes somewhat un-managable.

Just take the above as an example: if you want to customize the me-box with keystone, you need to create a file in your theme called views/modules/me.php - easy as that. As you have seen above, it is a TypeScript React component in Foundation. That means that if you want to use your React component, you need to recompile some assets. Since I don't know much about React, I cannot tell if swapping a component is easy or not. But the fact that me as an experienced Vanilla developer is absolutely clueless about the theme also shows how much it is different from what could be found in Vanilla until now.

Another example. Foundation comes with a "Quick Links" widget and guess what the class names of the list entries in that widget are! div.pageBoxNoCompat css-18ts849-PageBox-boxClass > nav > ul.vanilla-lfbjtw-quickLinks-list no-css > li.vanilla-1mmg9nn-quickLinks-listItem

Happy styling... Of course with some tweaking of source sass files and recompiling again it could be done. If you know how.

Furthermore after each new release of Vanilla, it wouldn't be as easy a to copy the new release files to your installation, but you would need to recompile all assets by yourself.

Yepp. Compiling, compiling, compiling. Everybody is happy with that new JavaScript world because it is so powerful and I agree that it is really impressive. But it feels limiting, too. A React powered UI may allow some simple tweaks in some kind of settings section. But beyond that, you need to get your hands dirty and build up good knowledge of how that compiling process works and all languages that are needed in that process. Looking at the code base gives you an impression of what technologies seems to get important: 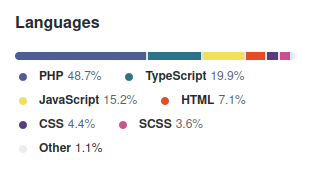 By now the usage of React doesn't make much sense because the big advantage - reactivity - is only in very few places. But I hope that this is an evolution and it would reach a point where you come to a nearly SPA like experience. In order to have a great feature like that, the downside is a JavaScript heavy project. Poor me :-( But that's why I try my hands on Quasar and hopefully get some more knowledge on that behated JS ;-)

Re: PLEASE fix the register system

He experienced it here aswell

The Reactions plugin is a second example

The QnA plugin is a complex example, therefore maybe not the best but I cannot think of any better right now. Maybe it helps to look what is done there. Use this method as an entry point: https://github.com/vanilla/vanilla/blob/master/plugins/QnA/QnAPlugin.php#L1353

At first you need to extend the database table. After that the model will handle that column like any other.

You need to show it in the front-end by yourself, though. But if it is included in the postback data, it will be saved automatically.

Always try to find simple plugins which do something similar to what you want to do: https://github.com/vanilla/addons/blob/master/plugins/PrefixDiscussionFilter/class.prefixdiscussionfilter.plugin.php