There are plans for getting on a more consistent release cadence. I'm hoping to have an announcement on this tomorrow.

Okay so wow, some huge revelations here and @R_J you are amazing with your help. Even though a brand new version of 2021.012 looked like it was working with String values returned form the database it was NOT working!! I WAS WRONG (I can admit when I am wrong) I didn't even notice certain thing were not there like my user Icon was not showing up, there was no way to log off... And after adding custom permissions they were not being followed as you suspected @R_J . So after trying to figure out WTF was going on with the string thing and talking to my hosting provider they said they have no servers running MySQL 8.0 so that was not an option. After doing research as to how others fixed this with the 5.7 version of MySQL I realized they kept saying what @R_J was saying was that you need to be using the MySQLnd driver. I have cPanel on my server and this option was checked and in a phpinfo() it said it was installed. What I did not realize is that it was not using it! you cannot use PDO MySQL &PDO MySQLnd at the same time (Obviously). Because my cPanel options for PHP settings are in alphabetical order I figured all these settings would be under P for PDO but fond this little reply from someone else in an article that mention cPanel has this setting under the N section for ND (go figure) So I disabled pdo_mysql and then enabled 'nd_pdo_mysql' & 'mysqlnd' once these settings took place. I ran my test code again and now it was returning INT values form the database. (YEAH). I also tested with @R_Js test plugin, it was now also returning INT values (Success). I loaded the site and everything is now functional!

To any users before you do the update please check using @R_Js plugin to see if your server is returning STRING values or INT values. If your database is returning STRING values you will have to fix this BEFORE upgrading. If the returned values are STRING then you will have to update to use mysqlnd. For every user that will be different based on your server for cPapnel do the following: 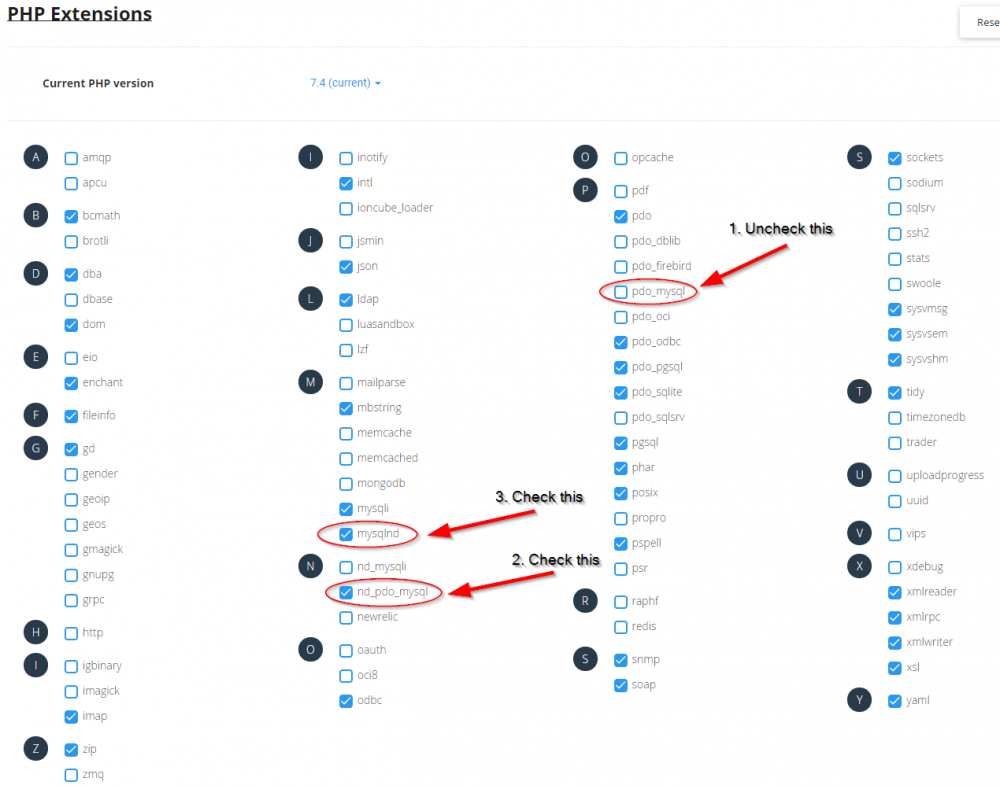 This will ensure you are using MySQLnd and then run the test plugin again and you shoudl see INT values returned. I hope this helps others. I am going to do the update again and see if I run into issues this time!

There have been some important changes to Vanilla since Vanilla 3.0. They've been stated in recent release posts, but I'll echo them here:

There's a long change log of fixes and features, spread across the RCs and recent "gold" releases. If you're curious, you can follow them:

Last, but not least, there's Vanilla 2021.011! You can checkout its change log and download the pre-built package, over on GitHub.

This is a major upgrade from 3.3. Please follow our upgrading guide. If you experience any issues, please post specifics (exact error messages, screenshots, etc.).

Hi all, look at that https://github.com/vanilla/vanilla/tags

Re: Has Vanilla development gone private?

Thanks or the answer @charrondev

I really appreciate you shedding some light on this. I am sorry that a lot of the community management burden of seems to fall on you as you are the only core member still actively responding here.

With the danger of going a little off topic let me explain how I feel about this recent change and how I think it could be leveraged to improve the Vanilla OS environment for everyone.

For the last years I experienced somewhat of a Vanilla fatigue ("burnout" being a too strong word for me). This is also why I am not as active in this forum as I used to be. It can be boiled down to two reasons: The pull request process and the inefficiencies of this forum.

It may come to no suprise that I am (as most people here) myself a frequent user of Vanilla, both on the user and admin side. I have encouraged my users over the last 7 years to report any bugs or glitches they encounter.

Pretty much all of my open source contributions are a direct result of my users reporting bugs to me. I usually patch those for my production environment and then submit a pull request. In the last years it has become increasingly hard not having to maintain a fork of the software.

Just upgrading to the latest open source version before these are merged would introduce regressions my users would immediately notice ("haven't you fixed that some time ago?"). I had to write countless throwaway plugins containing method overrides or dirty hacks to be able to upgrade the forums.

This is not a critique of the team! I understand there are priorities and reviewing and testing code changes takes a lot of time.

I can totally understand the reasons for using a monorepo as well. Daily syncs will probably be a good substitute for regular commits in the vanilla/vanilla repo. To be clear however, there is still a loss for OS contributors. Not having the info about why something was changed, cripples the ability to track down bugs.

I am currently in the process of tracking down a bug with announcements and user-specific discussion data. I don't know if I'll be successful, but without the background information provided by pull requests, issues and git blame data, I don't think it could be done at all.

However, with the new process, I think there are also great opportunities on the horizon. Since commits in vanilla/vanilla no longer directly affects Vanillas production environment, they could all go to a "os-patches" branch that could be merged faster. Faster merges would be more encouraging for new contributors and people who need certain fixes could pull from that branch.

The Inefficiencies of This Forum

The addon application has been aging very badly and I don't think it is needed very much anymore.

With a large part of the plugins being incompatible with recent versions, sorting by "most downloads" and the confidence rating become meaningless. Trying out plugins is very frustrating for new users since the majority does not work out of the box.

With most of the Vanilla created plugins soon being part of the core, the main reason, people still visit the addon repository on this site is most likely locales. But all locales should probably be included in the OS disctribution anyway. This is how most sofware seems to do it and it would eliminate the problem of having an outdated locale after updating. vanilla/locales zipped size is currently 4 MB which I don't think would be a problem to add to the standard download package.

For all user created plugins I propose a simple alternative: discussions

In my opinion, discussions are actually more suited for plugin discovery:

The only caveat I see here is the EditContentTimeout setting, which prevents a discussion starter from adding a new version to the first post. But this is also a good thing as attachment uploads can't be silently switched out that way, which will be just as secure as the current solution, if not more. However, it would require moderators to add a new version to the first post or link the comment with the attachment.

Something has gone wrong.

This is the most asked question on this site. It could be eliminated with a simple message at the top that reads something like this:

Something has gone wrong.

If you encounter this message, please edit the following value in your configuration file /conf/config.php before you ask for help:

Reloading the page will show the actual error which you can add to your question.

I love Vanilla. I have built highly customized communities fully on Vanilla because it is a joy to develop against the framework and I believe in its future. There are many modern community solutions out there, but the value of software like Vanilla that scales and is battle-tested can't be overstated.

Since this was a little long, here is a TL;DR about the relatively cheap changes which, in my opinion, would enhance Vanillas open source environment drastically:

Everything is wrong with this theme

I am simply breathless... it’s absurd above all things. How would someone release such a theme to an official forum?

I would consider firing this person.

A guide to ... JSON could not be converted into quill operations

PHP version or Server type/config seems to be irrelevant

A Guide to Probably Help Others

On Fresh install or upgrade of existing forum one/two very important settings in your /conf/config.php will change to

That is the same settings now in /conf/config-defaults.php

What the above means is that, your new default format is now 'Rich'. (THIS IS SOMETHING TO EASILY FORGET OR NOT REALIZE)

10 to 1, your existing discussions already have a format such as (Html, WYSIWYG, Markdown, BBCode, Text), these will have no problem because they will not evoke Rich Editor, and have nothing to do with the Rich Format.

Hope this helps some poor traveler.

As promised in another thread I am currently working on a new library of YAGA reaction icons. After the amazing code contributions to YAGA by @Bleistivt with help from @R_J and @pioc34 as well as others... it is now about time to give the look of reactions a fresher appearance.

This is the old icon table that - especially on retina displays - appears to be blurry and uncrisp.

I started working on new SVG icon set to integrate into YAGA. They will be able to scale to any dimension as they are SVGs. So far I cover some basics and before I come to more special icons I would like to ask the community what could be smart and relevant reactions making sense to many forums. 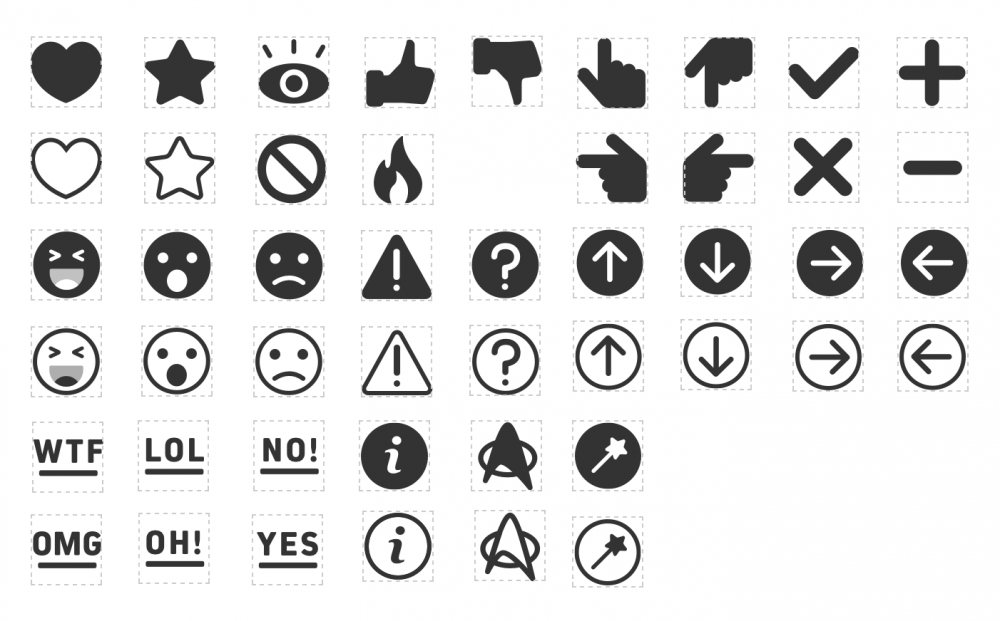 So first of all, what do you think of it and more importantly which reactions should I create that could be utilized by many communities? 🤔

Please provide one or two sentences of little explanation so I can understand the reaction you propose.

Re: How do I insert an image into a Discussion

You do not have "pretty urls" enabled. But that's a vanilla requirement. You should have a .htaccess.dist file in your forum root. Rename it to .htaccess and reload the forums home page. It should appear without the &p= stuff